King Julien is a strange character in the Madagascar series of movies. The talented Sacha Baron Cohen does his voice, and gives him an Indian accent, even though he is a native of the Madagascar island. He is a fun-loving narcissist, a ring-tailed lemur who counts bush babies among his subjects.

Odd? Yes, he is very funny, and very odd, which makes him a good mascot for the odd pantry.

This recipe, which basically consists of a number of julienned vegetables (particularly cabbage) is in honor of King Julien. I guess since it features cabbage you could call it a coleslaw which derives from Dutch koolsla and basically means cabbage salad. The dressing here is not mayonnaise-based, which gives it a lot more sharpness than the usual coleslaw. 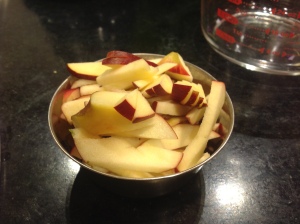 Collect all the vegetable ingredients, nicely julliened. Toss them around in a large salad bowl. Add pinenuts, salt and oregano and toss some more. Now add olive oil and the vinegar and toss yet again.

You can eat it right away but the flavor does develop a little more if you wait fifteen minutes or so.

And you know here is a new idea…try eating it with chopsticks. Failing that, use your fingers. 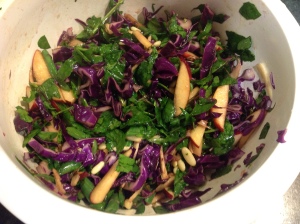