Yes I know there is a misspelling in the title, I just like the way that looks. Please direct all complaints to: The Editor, The Odd Pantry, Internet.

This is a simple rice preparation that looks quite grand (some people will mistake the yellow as coming from saffron which is the world’s most expensive spice). But it is simple enough to do for an everyday meal. Basically, use this recipe when you want to do a minor feast; not, for instance, when you have the Prime Minister of Senegal over.

Rinse the rice once and soak it for about 10 minutes to half hour. Drain the soaking water.

Heat the oil in thick-bottomed pot. Put in the garlic and the turmeric when the oil shimmers and stir it around for a couple minutes until the garlic looks shriveled. Now put in the drained rice and the salt, and stir to coat the grains with oil. Most of the grains will start to look opaque once they toast in the oil. 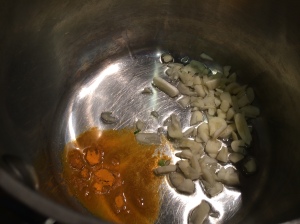 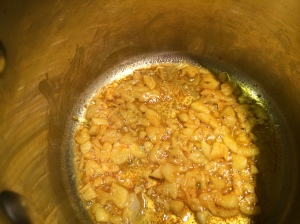 Put in one and a quarter cup of water and bring to a boil, covered. Turn it down to a simmer, tightly covered, and let it simmer for about seven minutes. Turn the heat off and leave it covered, in place, for about ten more minutes. This last step of waiting ensures that the collected steam is absorbed by the rice.

If you like, fluff with a fork before serving.

Variation: If you like, throw in a quarter cup of frozen peas before bringing to a boil. It will look a little fancier and be tasty too.