If I name the following ingredients: flour, potatoes, salt and pepper, dairy — a very commonplace list, in the Western part of the world — what doesn’t come to mind is a morning in a Sindhi town 60 years ago. And yet, so it is. My grandmother made these very rustic kachoris for my mother’s breakfast decades ago, and it is such a simple idea, but so complex and satisfying, that I still crave it and make it in my 21st century Californian kitchen, and yes, have it for breakfast.

This amount makes enough for a simple breakfast for one.

The traditional recipe asks you to boil the potato in lightly salted water until done. I have replaced that step with microwaving in nearly all such recipes that need a tuber to be cooked through before using. Not only is it quicker, but I feel like it avoids some of the nutrients leaching out into the water that one has to then throw away.

So go ahead, nuke the chap. Five minutes should put paid on a medium potato. 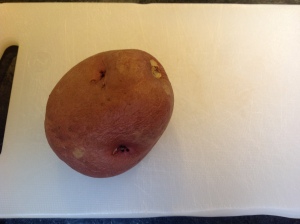 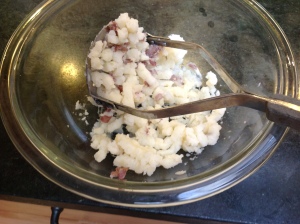 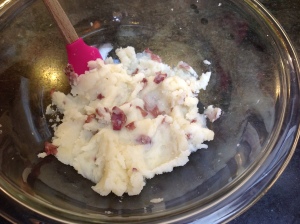 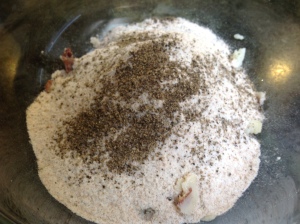 When it is no longer shooting steam lava at you when you touch it, cut it into cubes and roughly mash it, peel and all. It can be lumpy, I personally don’t mind that.

Add the flour, salt, and pepper.

Now. You may be alarmed at the amount of pepper I am having you put in. Don’t be! Remember, pepper drove world-traffic all the way to the South Indian coast for centuries. Pepper is the Helen of Troy of spices. You want to feel it.

Mix and squeeze the flour in with the potato mixture with your fingers, till it is a rough, shaggy mass. Now put in the plain yogurt and knead briefly to make it a rough dough. 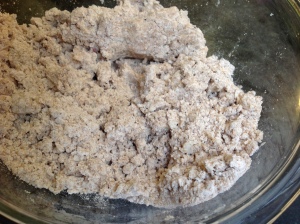 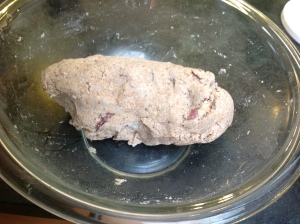 This amount of dough will roll out to about 4 small circles of 5 – 6 inches each. So break golf-ball sized pieces, and roll each out. Now if you are used to rolling rotis you will find that these don’t roll out as smoothly or as thin. This, naturally, is because of the influx of the natural lumpiness of the potato (which I insisted a few lines ago that you don’t quell completely). That’s fine! It all adds to the rustic charm. The only thing you have to be aware of is, you may have to fry them a tad longer than normal, because they are thicker.

OK. So circles rolled out, heat about an inch of oil in a thick bottomed fry-pan. When the oil shimmers (but before it smokes! That is when the oil starts to break down and do Bad Things to us) put in a rolled out circle. Let it cook on one side for about half a minute, bobbing it up and down with your slotted spoon or tongs. Then flip it, and cook it for another half a minute. Take it out and drain it on paper towels. 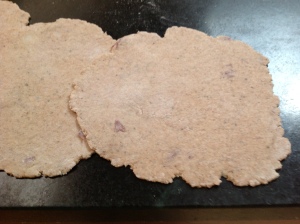 Have it with some more plain yogurt on the side. Surprisingly heavenly. Julia Child, eat your heart out.