The other day a friend — Rashmi by name — casually popped in a comment about a ¢#&!Ω# she makes at home, called palladya. Apparently it is similar to the kadhis of the north.

What?! Why have I never heard of this before? Me — a connoisseur of all kadhis everywhere, or so I thought? Why have you kept this secret from me all these years, Rashmi? I thought we were friends. We exchange stories about kids, husbands and various other things. And yet, you kept this from me? Sniff.

Anyway, now that the secret is out, I am glad to have been introduced to this concoction. It is a soupy thing that uses yogurt as a base just like the kadhis of the north, but instead of using chickpea flour for thickening, it uses ground coconut. Floaters are vegetables, a set similar to the ones in this kadhi from Sindh. Some typical ones are okra, white pumpkin/melon (this one), and other squashes. Ever the iconoclast, I used cauliflower; always trying to fit in at the same time, I used baby squashes (this one).

This was my first time making it, you can see how it turned out. We had it with rice and it was yummy. Next time I will try to get a finer grind on the coconut by first grating it. And souring the yogurt by leaving it out all day before using it is a tip from Rashmi I didn’t have time to use, but I will next time. 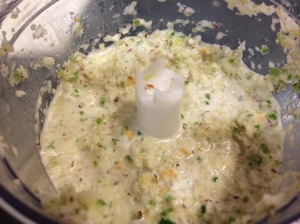 The grind, should try to get a finer one next time

Grind the drained channa dal, coconut, chilies and ginger together. You will need to add some water in order to get a fine grind, I ended up adding about half a cup. Do try to grate your coconut before throwing into the blender, that way you are more assured of getting it to turn into a smooth paste.

Put the veggies in a pot combined with the coconut paste, salt and some water. Bring to a boil, covered. In about 20 minutes of cooking at a simmer, covered, the vegetables will be more or less cooked. Poke with a knife to make sure.

If so, whip up the yogurt and add it to the pot. Stir, this only needs to heat through. Now the tempering. Heat the oil in a small, thick-bottomed pan. Throw in the mustard seeds when it shimmers; wait for it to pop. When they pop, throw in the curry leaves. When they look shriveled, turn off, pour the oil and spices into the palladya, and stir.

One thought on “Coconut-yogurty thing from South India”