There there, I know what ails you. You love the smoky flavor of dried red chilies, but their heat makes you run for the jug of water. It may also give you the runs. You curse the American continent for inventing these pods of TNT. You wish that you could turn into a bird, not so that you could then fly, oh so free! — but because then you would lack the pain receptors for capsaicin that you share with other mammals.

Don’t worry, I understand! You can cry on the shoulders of Aunt Odd Pantry.

And still, the flavor of chilies haunts you! How to get one without the other? There is a way! You see, just like some countries invest heavily in defense (like my home, the United States), while others have to expend so much energy to just survive in the desert that they don’t have much left over for defense (like Dubai in the UAE), chilies come in two styles as well. Chilies that grow in wetter climates, where their sworn enemy (the fungus Fusarium semitectum) grows easily, invest a lot in defense and become hotter. While chilies that grow in drought conditions have to be more judicious in how much heat they develop. The arch enemy — the fungus — is less of a problem in drought anyway, because it needs wetness too.

The hottest chilies in the world are the bhoot jholokia from Nagaland, India and the Trinidad Moruga Scorpion — both come from very wet climates.

But then there is the panoply of larger, not-hot chili peppers — the pasilla, the Kashmiri, the ancho — that can be added to the mix to add flavor and color but not the heat. They thought of everything. 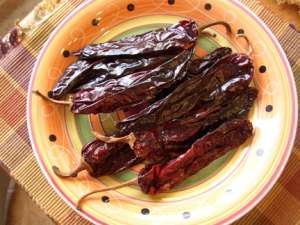 Anaheim Chilies from About Mexican Food

This dish in particular is based around that smoky flavor of chilies. Tomatoes and garlic play a supporting role. Yogurt is used to moderate the taste further. Like several of my other recipes, this is a gravy that one can throw anything into. It goes very well over rice, or with chapatis, or dosas, for that matter.

The recipe below makes enough for about 6 people.

This proportion of mild to hot chilies gave me a pretty hot gravy. Feel free to use a different proportion, from no hot chilies at all to all hot chilies. You better know what you are doing if you choose the latter.

Heat a roasting pan on medium-high and place the dry chilies on it for a few minutes until they darken. Remove them to cool for a few minutes. When they are cool enough to handle, you can destem and deseed them. Grind them to a fine powder in a clean coffee grinder. 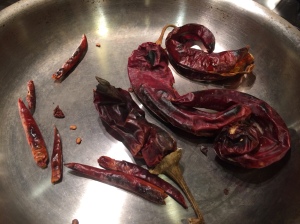 Make a paste of garlic, cilantro and chili powder, adding as little water as you can get away with.

Heat the oil in a thick-bottomed pot. When it shimmers put in the paste. Stir and let it cook until it darkens, on medium heat. Soon you will see the oil shimmering and the paste will seem drier and yet shinier. Then you know it is done.

Now whip up the yogurt and swirl it in. Stir and let that cook as well. In a few minutes, it will have properly merged with the paste and become homogeneous. Now it is time to put in the roughly chopped tomatoes.

At this point the paste is probably so liquid that you can raise the heat to highish. Let the tomatoes liquefy and boil off mostly. Add the turmeric and the salt. At this point, the basic gravy is done.

Add anywhere from a half cup to one-and-half cup of water to allow it to boil for a few minutes; also, by controlling the amount of water you are controlling what sort of dish you want it to be. If you plan to add some potatoes to it and have it over rice, for instance, you could make it more liquid, because potatoes will have their own thickening starch. If you plan to add chicken bite-sized pieces, and want a drier sauce around it, you can skip the water entirely — the chicken will let out some of its own liquid.

As you might have guessed, now is the time to make a dish out of it by adding whatever things you want to this sauce. Care must be taken to make sure that whatever you add will have similar cooking times. One trick is to precook the vegetables in a microwave and then add it in to blend.

Here are some ideas:

This is what I did with it — paneer and peas. 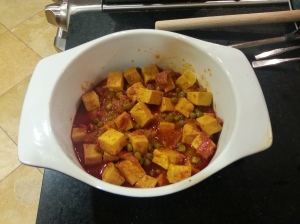 8 thoughts on “Exercise your right to choose — the chili”