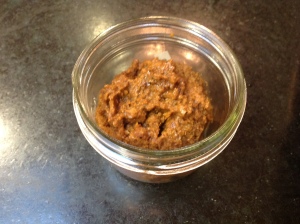 I hope you are clutching your socks, Dear Reader, because this recipe is going to Knock Them Off. It combines the heat of chilies with the singe of ginger, spiked with garlic. Just when you think you’ve been slapped around enough, in comes the soothing savoriness of lentils, and then you get your sweet reward.

I thought I was familiar with South Indian food, having grown up in cosmopolitan Bombay. But every once in a while I hear of a preparation that reminds me that restaurant cuisine (for any regional food) is rather more limited than what families actually eat. Restaurant cuisine is a cartoon representation of the reality that plays out in home kitchens.

South Indian food is culturally quite different from North Indian. There is a heavier reliance on rice than on wheat, for one. Then there’s the prevalence of coconut. But the one thing that really interests me (and one that I’ve used in quite diverse recipes, like on salmon — details later) — is that some lentils are used as a spice.

The main one is urad dal (Vigna mungo). This is known as ‘black lentil’ when it is whole, and ‘white lentil’ when it has been split and skin removed. This bean is native to India and one of those stealth ingredients that appears in various forms all over the country — maa ki dal in Punjab, dahi vada all over the north, a third of the grain content for dosas and idlis, and in innumerable recipes as a sprinkling in hot oil as a spice. When used as a spice, it does not add heat, but a sort of sharp savoriness and crunch. Imagine a quieter peanut. It is hard to describe.

But the star of this show is ginger, another tropical beauty. So let us proceed with ginger chutney. I got this recipe from my friend Rama who hails from South India. She will vouch for its authenticity and I vouch for hers.

4 – 5 dry red chilies, or adjust to your heat preference

half an inch square of jaggery — substitute with sugar

Mince the ginger and garlic. Their relative proportion are shown here: 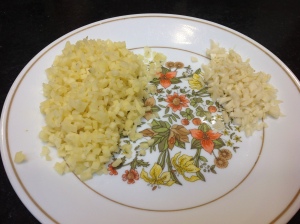 Also have the dals and dry red chilies ready to go, and their relative proportion is shown here:

Warm a small, thick-bottomed pan with a teaspoon of oil. When the oil shimmers, put in the dals, first. Stir for around 5 minutes on high-ish heat, until they smell roasty and get reddened. They will turn color into something like this:

Remove them to a vessel while draining the oil, and in the same oil, roast the dry red chilies. In a few seconds they will swell and in several more seconds they will darken. Turn the hood on if you have one or open windows, or you will pay for it by coughing. Remove the chilies once they darken. The spices to be dry-ground are done.

Now in the remaining oil, add the ginger and garlic. Add a drop more oil if needed, to moisten them completely. Stir on medium heat until they look shrunken and cooked (not brown). Like so:

Turn of the flame, and now the grinding starts. First the dry spices are ground separately in a coffee grinder to produce a coarse powder: 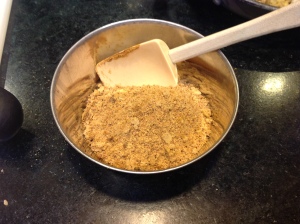 Now for the blender step. Pour the dry spices, the ginger and garlic, the half teaspoon of tamarind, some salt to taste, and some water to lubricate the blades. Blend for about 3-4 minutes to get a smooth paste:

There, you have your ginger chutney, ready to eat with idlis or dosas. Those are just the traditional accompaniments, but this chutney could add a lot to a sandwich with roasted vegetables, or a felafel wrap, or spread on baked chicken.

Update on 3/28/14: So months after posting this, I’m entering this in this month’s Spice Trail contest which is about ginger, hosted by Vanesther at the Bangers and Mash blog:

Go thou and explore!