Bread usually goes stale before it starts to rot or mold. And therein lies a whole category of recipes.

When bread goes stale it becomes dry, leathery and unpalatable. Although it seems like the bread is losing water, apparently there is no net loss of water or intake of water from the outside air — it is just that some starch starts to crystallize, drawing water in from the surrounding bread substance. To some extent, this process can be reversed by warming the bread. This book — On Food and Cooking: The Science and Lore of the Kitchen

— has a great explanation of the staling process.

Frugal housewives have always looked for ways to revive that unpalatable brick. Some methods take it all the way to dryness, like croutons and breadcrumbs. Others soak it in liquid. One famous example is panzanella, the Italian bread salad made out of stale bread chunks. Another from Sindh is seyal bread. This is a method of cooking bread with spicy liquid that is often eaten for breakfast.

To get started, cut your stale bread into chunks about and half an inch all around so you have an idea of how much substance you are trying to rescue. I love French bread in this recipe, or leftover rotis, but not enriched sliced breads that have some sugar in them — but that is a personal preference. 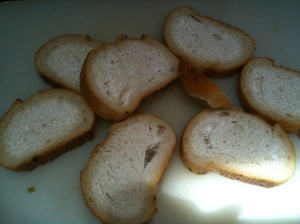 For the amount of bread shown above,  I used:

half an onion, chopped but not too fine; 3 big cloves garlic, minced; one serrano chili, minced; and two medium tomatoes, chopped. For spices, about half a tablespoon of ground coriander, and half a teaspoon ground turmeric. Add some red chili powder to up the heat if you like. Some salt to taste. And for garnish, lots of fresh cilantro, chopped fine.

Heat about two tablespoons of oil in a thick-bottomed pan. Put in the onion, garlic and chili at once and stir. The idea is to not let the onions caramelize, because that sweetens them, and this recipe is all about the savory. In fact, that is a commonality in all seyal recipes (one can seyal fish, meat, etc.) — that the onion is cooked till translucent, but not browned.

This will happen quickly, in about 3 minutes on medium heat. Now put in the tomatoes. At first juicy, like this: 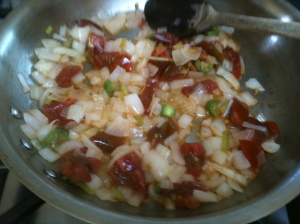 they will start to dry out in the heat (crush them with the back of your spoon to get them to release their juices sooner).

When most of the liquid is gone, put in your dry spices, the coriander and the turmeric and stir. 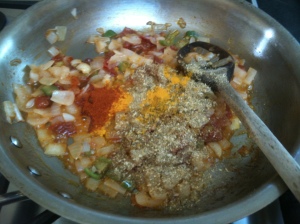 They just need to combine and roast a bit. 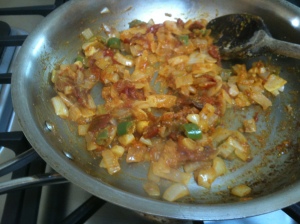 Now goes in about a cup and a half of water, and the whole mixture is brought to a boil. Let it roil for a few minutes, until it goes from looking like this: 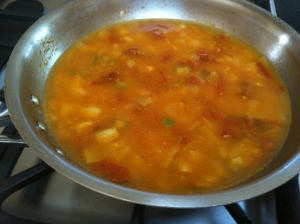 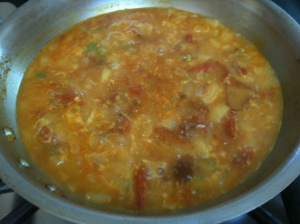 At this point, the cubed bread can go in. The mixture should now be salted, because one has an idea of the size of the meal. 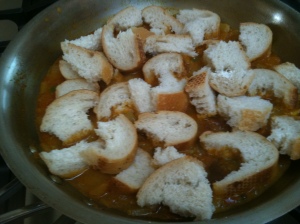 Stir the bread into the liquid to get it to absorb, garnish it liberally with cilantro, and look like this: 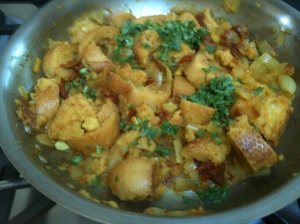 Have the oven ready at 300 F. Cover the pot, make sure the liquid is simmering, and stick it in the oven to cook for 15 minutes. The last step can also be done on the burner with low heat, and in addition a heat reducer between the burner and the pan. Either way, you end up with a steaming pile of this: 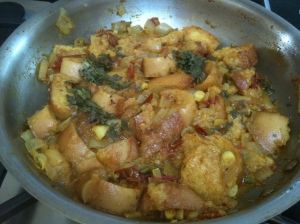 Now, don’t be turned off by its rustic look. Rustic it is, and frugal, but it is delicious; and at least for me, brings back lazy Sunday morning breakfasts with hot tea along with seyal bread.