The ancestor of Bombay sandwich is the dainty cucumber sandwich that the British have served with their afternoon tea since the Victorian days. It even makes an appearance in Oscar Wilde’s The Importance of being Earnest. It has no protein and not much nutrition. But a cucumber sandwich is cooling, and so is tea! Which is why, I can only imagine, the British colonialists brought this tradition over to my hot, hot country India, where they spent about two hundred years, overstaying their welcome by about…I don’t know, a hundred and fifty years or so?

The cucumber sandwich thrived in cricket clubs, gymkhanas and tea houses where Indian servers would thinly slice bread and cucumbers, lop the crust off the slices, and serve these elegant little squares to their British bosses. Then those bosses were gone. They left behind a bunch of expert cucumber slicers, who I guess decided to use their skill in a very Indian — and really, a very Bombay way — hawk this sandwich from the roadside and add some chutney.

Ah. That is what makes it. Two hundred years and the British didn’t learn to add chutney to the cucumber sandwich. They left it pallid. Tasty, but pallid. And rather limp. But here, add mint chutney, beef it up with some potato, throw some sev on top, panini press it, put samosa filling it it; my god, the streetside stalls in Bombay have come up with a hundred variations.

But today we focus on the sada (plain) Bombay vegetable sandwich.

Sandwich stalls are found all over the sidewalks of Bombay. All of them can produce a killer sada sandwich. All one needs really is a stand about two feet square. There was a sandwichwallah on my street growing up — G Road. Around seven in the evening there would be a flock around him. His hands would be moving rapidly. There are very few choices for the customers to make — more chutney or less, and that’s about it. Everyone went away happy with six neat squares on a sheet of newspaper.

This is a far cry from the way I imagine cucumber sandwiches were served during the British days, on gold-inlaid bone china. But they do say newspaper makes street food taste better. I can vouch for that. Buzzing flies help too. 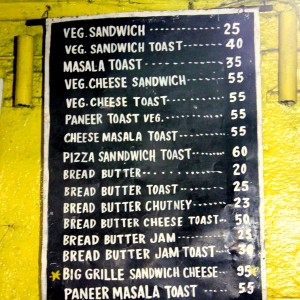 In college, by great good luck, I ended up in a streetside sandwichwallah’s personal empire. Yes, technically, the college is an official building, and Jay sandwichwallah just occupies the sidewalk outside it; but sometimes it felt like Jay Sandwich Stall is the main feature, and they built the college around him.

His two-feet square stall has expanded to occupy the entire sidewalk. It has a shade and a counter for customers. It even has a marquee. He has an extensive menu, all based on the original sada sandwich. He has a staff. The stall has killer aphorisms posted all over it, like ‘Please Use Dustbin’ and ‘Sandwich in One Hand Money in the Other’.

But it has no seating. You are not permitted to order from your car either. You stand in front, order, wait, take the sandwich and go.

He even has a fan club on Facebook. That is how you know he has arrived. And do you know how your humble blog, The Odd Pantry, has arrived? I have a field reporter! My intrepid reporter in the field, Lata Wadhwani, got the following recipe for me from the Man Himself.

In the grand tradition of cucumber sandwiches, lop off the crusts of the bread. I didn’t, but I tend to be iconoclastic.

Apply butter on one side of each slice. Apply green chutney on one slice and ketchup on the other; if you want it spicier, skip the ketchup and use green chutney on both slices. This is what I did.

I must mention — work rapidly with big, flat sharp knives to get into the spirit of it. 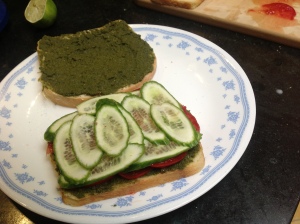 If you like, add layers of onion and beetroot.

Now cover with the other slice. Press down firmly to get the sandwich to meld into one. Give it one cut vertically with a super sharp knife, and two cuts horizontally to make 6 little squares. Slide the squares onto a sheet of newsprint (or what the heck, use foil) and serve.

Hand the customer the sandwich with one hand and take the money with the other.

A version of this recipe has earlier appeared in this book: The Lazy Gourmet, Magnificent Meals Made Easy, as ‘Bombay Sandwich’.