Sometimes spice is just a state of mind. Plants don’t come with Dymo-printed labels that say ‘Spice use recommended’.

Now you might think I’m making an issue out of nothing. Obviously, plants that produce a strong appetizing smell can be used as spices, and others not, right? No mind tricks necessary.

But consider what happens during the process of blooming spices, otherwise known as tempering, or tadka. A sequence of spices are thrown into hot oil. They may be seeds — like cumin or black mustard, dry leaves like the bay, or even bits of bark — like cinnamon.

The other thing that happens during blooming/tempering/tadka is that the oils inside the spice, those that carry the aromatic compounds, escape into the pool of oil in which they are cooking. As the oil slithers and smears all over the food, as it is wont to do, it carries the essential oils of the spice around with it too.

Tadka is such a powerful method that it has become a standard way to either begin or finish off most dishes in Indian cooking. But now, listen carefully, because this is the most important part. Once the key to unlock flavor known as tadka/tempering/blooming has been found, one can really excavate flavors from non-spices, from seeds that no one would particularly think of as a spice.

Don’t believe me? What would you say about split lentil beans used as spice? Well, in the south, two kinds of lentils, the urad dal and the channa dal are both used during tempering; they each create a characteristic roasty flavor.

Not impressed? How about rice? One of the unique things about the state of Kerala, which just happens to be the home of such stalwarts as pepper, ginger and cinnamon, is the use of raw rice as part of tempering, usually in coconut oil. Used in this way, bland old rice acquires a golden roasty flavor that permeates subtly throughout the food.

i’m also having fun learning about one of Kerala’s signature dishes known as thoran. A simple and soothing preparation, it involves any vegetable cooked with some grated coconut, tempered simply with mustard seeds, curry leaves and possibly a couple other things. In my attempt, I left out the grated coconut, choosing instead to cook it in coconut oil to provide a similar sweetness.

This is the perfect kind of simple background where the use of raw rice in tempering can be shown off. So here we go — cabbage thoran. 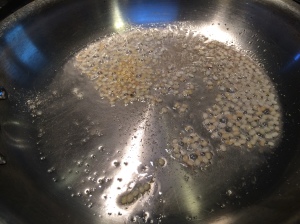 The rest of the spices 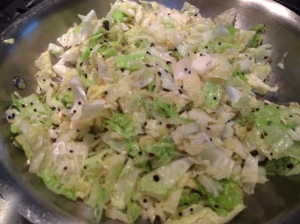 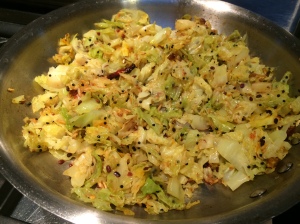 Cabbage thoran with roti and dal

Once the leaves crisp up, throw in the cabbage and stir to combine with the oil. Add the salt, turmeric and red chili powder and mix it nicely with the cabbage until it is evenly covered.

Cover the pan, turn the heat to a simmer and let it cook this way, in its own steam, for about 10 minutes more.

Serve with white rice, or, as I did, with chapati / roti and another side.

8 thoughts on “Spice is a state of mind: cabbage thoran”