I must have had a stressful week at work because this is my second post about comfort food with rice.

It is probably foolhardy to attempt a definition, but ‘kadhi’ is a boiled liquid of yogurt and chickpea flour that is made in various ways all over India. It combines the sourness of yogurt with the body added by the chickpea flour, and some sweetness, usually. The result is so soothing that the aromas can bring the most hardened criminal rushing back home to his mother’s kitchen. While I’m not suggesting you use this for crime management anytime soon, it is certainly one of the simplest Indian recipes to put together for non-Indian cooks.

Now every region of India, even every micro-region, has its own version. But the salience of each of the few ingredients in this recipe is such that each cook’s kadhi will be a little different. The number of tablespoons of chickpea flour used makes a difference, as does the sourness of the yogurt you started with; also how much chili heat has been added or how much sugar.

I grew up eating lunch at Gujarati friends’ houses, so I have a special place in my heart for the Gujarati kadhi. It goes well with soft white rice or creamy khichdis. But we had it with Bhutanese black forbidden rice and green beans on the side.

This version is from Taste of Gujarat by Nita Mehta.

Paste of chili and ginger 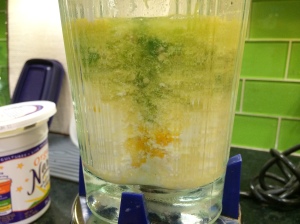 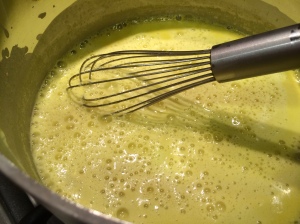 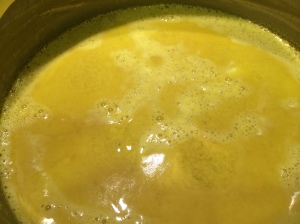 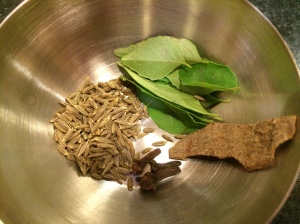 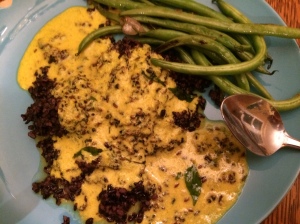 Make a paste of the ginger and chili in a mortar and pestle. In a blender, put in the yogurt, the chickpea flour, turmeric, salt, the paste from above, and 1 cup water. Give it a whirl to combine. Put this soup in a pot and bring it to a boil. At this point you can add the sweetener. Let it simmer, uncovered, for about 15 minutes.

Now the kadhi is more-or-less done, all that is left is the tempering. Turn it off and cover it. Heat the ghee in a small pan. When fully melted and shimmering, put in the cinnamon and cloves; when they sizzle the cumin seeds; when that sizzles the curry leaves. They will shrivel up quickly. Turn off the heat and pour the ghee into the kadhi. Also add the minced cilantro (this does not need cooking). Stir nicely and enjoy with rice.

11 thoughts on “Gujarati kadhi to soothe the heart of beasts”