Today in Better-Know-A-Fruit…I will show you some family pictures! This is a family that has origins in Peru and Ecuador, but has pretty much settled all over the world (like a lot of us nowadays), so no matter where you live, you might be familiar with at least one of its members. I have also included my rather dramatic new attempt at an Internet quiz.

Here is the cherimoya (Annona cherimola). This one is as big as a baby’s head. Found all across Latin America, the flesh is studded with hard black seeds that one must spit out; and white flesh so delicious that the seeds can’t stop you from getting at it. They may try, but they won’t succeed. 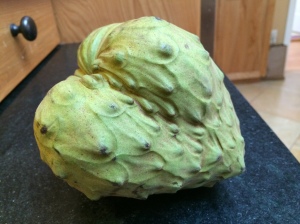 Here is the custard-apple, sugar-apple or Seetaphal (Annona squamosa), found all over Asia. When it is ripe enough one applies very gentle pressure and splits the fruit apart. The off-white custard is studded with seeds. As with the cherimoya, one scoops the flesh up with a spoon as though you are eating ice-cream, and spits out the seeds.

Factoid: Seetaphal does not mean ‘Seeta’s fruit’ as the name suggests — Seeta being the heroine from the Hindu epic the Ramayan — instead, the name comes from the Sanskrit root meaning ‘cool fruit’ because of its temperate growing needs. Interestingly, the word ‘cherimoya’ comes from a Quechua word that also means ‘cool seeds’.

The Seetaphal was introduced in India by the Spanish in the seventeenth century. Its fortunate name that made it sound like it hung around Indian forests way back in the days of the Ramayan has lent it a very homey cachet. So when relatives of the Seetaphal were found, of course more characters from the Ramayan were used to name them.

The next fruit in that family they named Ramphal (Annona reticulata). This is the larger, redder and I guess more masculine-looking? version of the Seetaphal. Also known as the wild one of the pair, it is not as tasty as the Seetaphal. Some call it the bullock’s heart, you can see why.

Given that there is a Seetaphal and a Ramphal, could the Lakshmanphal be far behind? This is the graviola or soursop (Annona muricata), known as Lakshmanphal in India. This is now grown throughout the tropics. The flesh is slimy and white just like its cousins, but strangely sour. There have been grand claims made about its ability to cure cancer and conspiracy theories thrown around about corporations that are keeping the news of this medical miracle from us. Status of its cancer-killing claims: undetermined. So whether it cures cancer is unknown, but there are reports that too much of this might actually cause Parkinson’s.

Next is the delightfully named paw-paw (Asimina triloba). Not only is this actually one of those rare fruits that are native to the United States, it is actually the largest edible fruit native to the United States. Chew on that for a bit…but do spit out the seeds. Of course the yellowish, custardy flesh of the paw-paw comes studded with seeds also. This fruit does not ripen off the branch and does not keep well; hence, it is not often found on grocery shelves and must be foraged for. You know who else foraged the paw-paw? Lewis and Clark, that’s who. 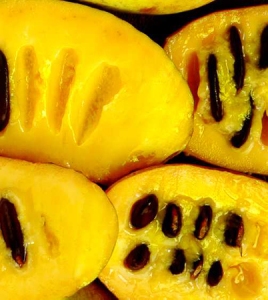 An even more delightfully named ylang-ylang — but we only care about the flower this time. This flower is so fragrant that it has found its way into the rather well-known Chanel No. 5.

That was the Annona family, now for a slightly more distant cousin. Australians may be familiar with this one. The Bolwarra or the native guava (Eupomatia laurina) is another one of those seed-studded, pulpy, custardy fruits that the flesh must be scooped out of. This is often used in jams, jellies and beverages. I have never tried it myself, so, much as it would delight me, I cannot report first-hand on what it tastes like raw.

Like all families these fruits share certain traits. The custardy flesh tends to have floral notes like that of roses. As soft as banana or avocado flesh, it is faintly gritty. They would not work well in fruit salads but would be great in ice-cream. They must be eaten when fully ripe, but when overripe they start to ferment and taste slightly alcoholic. These fruits tend to have a cone-like or bulb-like appearance, and to me look sort of like a clenched fist atop a super-thin wrist.

Botanically, these fruits are interesting too. They tend to have fragrant flowers (remember the ylang-ylang?) because they need to attract beetles by their scent, in order to get their…ahem…male parts into their female parts. Pollination, for the squeamish. The other champion pollinators of the insect kingdom — the bees — these plants have no use for. They were invented before the bees, do not produce nectar for them, their flowers don’t accommodate them, and are basically invisible to them.

Did any of you wonder why these bloody fruits absolutely must be studded everywhere with seeds? Couldn’t they at least try to be convenient like the other fruits and cluster the seeds in the middle? No — because they aren’t a single fruit at all. Millions of years ago separate fruit in these plants got fused together into one — so they are all aggregate fruits.

Now for the quiz! Excitement! Big font! Flashy gifs! Here is a relative of this seedy family that should be a rather familiar sight to most North Americans. This one is not edible though unless you are a bird. Can you guess what it is?

Click on this link to find out! If you guessed right award yourself 14 Odd Pantry points. That’s right, 14! Aren’t I generous! You can redeem them at any time by writing to: The Editor, The Odd Pantry, the Internet.

One thought on “A seedy family full of custard”