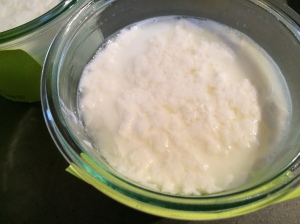 I have before rather blithely thrown around assertions about how easy it is to make yogurt at home. Room temperature, time, blah. blah. So, madam, how about you put your money where your mouth is, hunh? Hunh?

Fine. Let’s do it. And in the process, get answers to a few persistent questions.

Those of you who hire a house cleaner — you know how easy it is to have your house cleaned, right? You prepare the house and leave. They come over, do the job while you are out working, whooping it up, or waiting watchfully outside the door. Come back home and enjoy your clean house.

Did you do any hard work? No — you waited. Of course, you had to hire the cleaners and set things up for them. But you didn’t actually dust a single chair or sweep a single room. Someone did though.

Delegation! That is what making yogurt is about. We delegate the making of yogurt to the lactic acid bacteria. We ourselves do nothing but wait while they are about their task. Of course my analogy breaks down somewhat because the lactic acid bacteria are not really hard at work with their dustpans and brooms, but rather simply enjoying a meal. It is as though you hired house cleaners to come over and dine at your house, and magically when they were done eating, your house sparkled.

The picture above describes the process.

Enough theory. Let’s get to action. In my home in Bombay we made a batch of yogurt every night. Most times it was delicious but every once in a while we would have a runny mess that us kids refused to eat. What went wrong? I have also made yogurt at home in California many, many times. Sometimes with spectacular success. Other times not. Why? 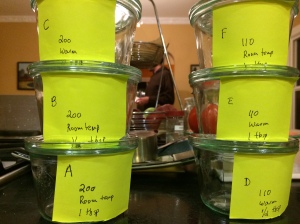 The ideal yogurt recipe is this: Heat milk to 185 F (scalding), wait till it cools to 110 F (warm). For each cup of milk, add a tablespoon of whipped yogurt and stir. Keep it warm for about 8 hours.

But what happens if you add less starter? What if you skip the step of heating to scalding first? Will room temperature work, just take longer? Time for…

The experiment! I made 7 cups of yogurt:

Cup 1: Left at room temperature to set, not scalded first, one tablespoon starter

Cup 4: In warm oven to set, not scalded first, half tablespoon starter

Cup 5: In warm oven to set, not scalded first, one tablespoon starter

Cup 6: In warm oven to set, scalded to 185 F first, half tablespoon starter

Cup 7: In warm oven to set, scalded to 185 F first, one tablespoon starter

The most important factor that good yogurt depends on is warmth while leaving it out to set. In my home in San Francisco room temperature is around 70 F. The first 3 cups, that were left out on the counter to set, turned out terrible. It took 2 – 3 entire days for them to set, and those that eventually did, had by then developed off flavors. Cups 1, 2 and 3 ended up down the drain. To avoid that fate, yogurt must be set in a warm environment!

The second factor that mattered was whether milk was scalded up to 185 F first, then cooled, or was it just warmed up to 110 F directly. Funny thing is, yogurt formed either way. But the yogurt that formed when milk was scalded first was firmer with a more even texture. The reason for this is: when milk is scalded, some of the whey proteins get relaxed (denatured), and they help the casein proteins form a more even web, rather than clustering together. The actual effect of this is that when milk has been scalded first, the yogurt is firmer and more even, while if it hasn’t been scalded, the curds are more clumpy and separate from the whey.

The third factor — whether we used one or half tablespoon of starter, hardly seemed to matter at all. If the other two things were done right, you could not detect a difference. For the borderline cases, one tablespoon helped it some. It did not solve all problems though.

Now I am equipped to give you the most ideal yogurt recipe as tested by my household.

Start with whole milk. And if you are starting with store-bought yogurt, make sure it says ‘live cultures’. Warm up an measured amount of milk till the point it starts to rise and foam up. Turn it off. Wait till it cools down to just lukewarm. If you want to be precise, the first temperature is 185 F and the second temperature is 110 F. 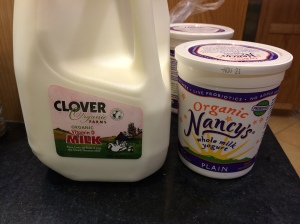 Fine. Turn on the oven to about 150 F or so. Turn off as soon as it reaches that, and turn on the oven light. Leave it on. Put the milk in the jar that you want the yogurt to set in. For each cup, put in a half tablespoon of stirred yogurt and stir to meld. Cover and leave in the warm oven for at least 6 hours. In 8, 10 or 12 hours, it will turn more and more sour, so it depends on your preference. Store in the fridge thereafter.

I have often woken up in the morning and, completely forgetting I have yogurt setting in the oven, turned it on with melted plastic lids, ruined yogurt and other disastrous results. So now, I use oven-proof glass Weck jars, and put a sticky note on the oven to remind myself.

No more accidents. Just good creamy sour yogurt which is not accidental at all.

8 thoughts on “Curds and whey”