Here is one reason to relish your pigeon peas — it is the first legume to have its genome completely sequenced! Now isn’t that appetizing! Here is the other reason — they are delicious.

Pigeon peas are known as tuar dal or toor dal in India, where they are used from south to north, from east to west. When mature, the full lentil looks like a dried beige pea. But the way they are used normally is after having the outer husk removed, and split into halves, so they look like little yellow half-spheres. This, by they way, is how most dals (lentils) are commonly eaten — husk removed and split into halves.

In my family we had soupy tuar dal with rice at least once a week. Its deep musky flavor seems to take very well to some added sweetness and tang. Of course that means the holy pairing of jaggery and tamarind. I could go into a deep digression about each of those, but suffice it to say that you can use brown sugar instead of jaggery, and lemon instead of tamarind; let’s stay on our musky subject of the day, people — tuar dal. Eyes on the ball now.

I started with 3/4 cup of the stuff. Work night dinner means I don’t have the luxury to allow it to soak for a couple hours; so I rinse, and soak in near-boiling water for just about fifteen minutes, and see the volume double. I learned this trick from Madhur Jaffrey and it has served me well.

Now, time to boil it. Half a teaspoon of turmeric goes into a pressure cooker, the rinsed and drained tuar dal goes in next, and 3 cups of water. Cover the pressure cooker and let it come to a boil; turn it down and cook, pressurized, for twenty minutes. If you don’t have a pressure cooker, a regular saucepan will do, but the time stretches to an hour and a half. Leave the lid open in this case, at first, because as it first comes to a boil, the lentils will spew like a volcano, and leave watery lava all over your burner.

For the fat in this dal, I used one tablespoon of ghee. There are a few dishes where I opt for ghee instead of oil because of the the lusciousness it gives the result. Butter is a substitute, but I have never tried it.

For the seasonings, I used asafetida, red chili powder, cumin seeds, mustard seeds and fenugreek seeds, in that order.

The seasoning of lentils, known in central India as vaghar, and in the north as tadka, takes some special sequencing. Use a small but thick-bottomed pan to heat the fat in. First, the asafetida can go in pretty quickly, as soon as the fat heats up a little. It will foam in seconds. Now put in half a teaspoon of red chili powder.

Wait about 30 seconds. The seeds will first make sizzling sounds, then each little ball will pop and you will start to hear popping sounds.  At this point, put in one teaspoon of fenugreek seeds.

A note on fenugreek seeds. If they saute long enough to turn dark brown, they will be hard and bitter. So to avoid that, they go in last and cook the least in the hot oil. Of course if they do turn bitter, some simmering in soupy stuff will resolve that problem, so no harm done; but we try to avoid them turning bitter at all.

In a few seconds the fenugreek will sizzle as well; now put in and inch of ginger, minced thusly:

…and 2 green chilies, stems removed, and sliced through (if you have curry leaves, use about 6 of them):

Wait till they sizzle, and the chilies show blisters, then empty the entire thing into the dal. 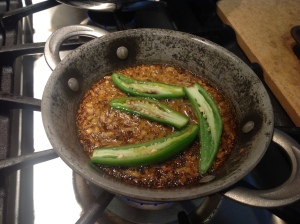 Allow the dal to still simmer on for a few minutes for the flavors to meld.

Garnish with a handful of chopped cilantro and stir. Have it mixed with rice and perhaps a fried or grilled vegetable on the side.