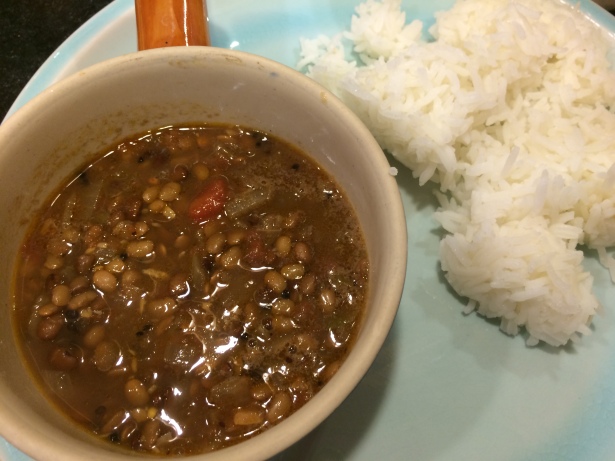 I’m guessing that not many of you will have heard about the dal or bean I’m about to write about today. I certainly hadn’t. It is a small flattened bean, multicolored in a spectrum that goes from beige to dark coffee brown. It is commonly known by the rather picturesque name of ‘horse gram’; and if you think that a word like that harks back to a time when crops were named after farm animals, while animals were named for their use on the farm, you’ve got horse gram pinned.

In more ways than one this is an ancient grain. Grown in South India since the Neolithic, any knowledge of its wild progenitor is lost, though its cousins are found growing wild in the African savannas. It is the kind of grain that families grew in order to feed their cows, and then partook of the excess. Some lovely recipes were created around it nonetheless, particularly in the states of its origin: Karnataka and Andhra Pradesh, where it is known by the names of huruli, kulith, kulthi, ulavalu, kollu. Invariably it is soaked for a long time, then often left whole, and often sprouted. Its cultivation slowly trickled north over the Eastern ghats to the plain around the Ganges, where it is known as gahat; and they conceived of a way to mash it down with spices. Since I have a batch, I will be exploring a few different ways to cook it in these pages.

It never made it to the chic world of Indian restaurant cuisine (yes, I’m being sarcastic), nor really to urban households. But out there in the villages, this tough little herbaceous legume grows in conditions of utter deprivation, with no irrigation and no fertilization to speak of. Being a legume, it enriches the soil instead of taking from it.

Most other pulses that humans have favored, we have cultivated in our own image, to go soft. They cook down to mush (not knocking mushes!) and take no long soaking. But horse gram, though a tiny thing, must be soaked overnight, then cooked for a while, and even so, still retains its bite. One has to imagine that a grain as tough as this, practically wild, imparts some of its wildness and toughness to the eater.

Those out shopping for pulses in the US might often visit Indian groceries looking for them. But horse gram is rare even in Indian groceries, as far as I know. So you might turn to online stores. Here are some that claim to stock it:Patel Bros., Big Indian Store, and I Shop Indian.

Now when you have a batch, and are about ready to soak it—this is a good time to sift through it bit by bit, looking for rocks. I have forgotten this essential step a couple times, having been spoiled by the more ‘progressive’ pulses, and been subjected to the unpleasant sensation of my teeth grinding on grit. I will never forget this step again.

About the soaking. Generally an overnight soak in plenty of water is recommended; but what if you find yourself on the very day, the very evening of the meal, and must, simply must cook horse gram that very day and no other? Here is a trick I learned from Madhur Jaffrey’s books: soak in very hot water, near-boiling, covered, for one hour or up to three.

Substitutions: of course, the world of beans and pulses is just dripping with riches. So there is no reason to imagine that this recipe is fused-at-the-hip with horse gram only. Substitute any whole bean of your choice: French lentils will do (with no soaking), or black chickpea (with). Red kidney beans (rajma) would do as well.

This is a nice simple preparation where the beans float in a mildly spiced gravy of tomatoes and garlic. It goes very well with a steaming hot bowl of white rice on the side. You could also try eating it as a sort of bean soup as part of a Western meal, in which case a garnish of some raw onions, lime and avocado might be nice. 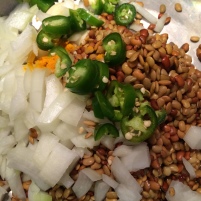 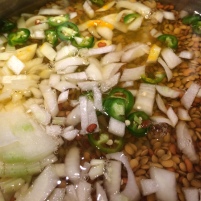 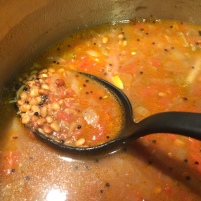 Sift through horse gram to discard rocks. Soak horse gram in plenty of water overnight, or in hot water for one to three hours, covered.

Place the horse gram in a pressure cooker or large pot. Add the turmeric, onion, garlic, chilies, and two and a half cups of water. Pressure cook for about half hour, or, if you used a regular pot, bring to a boil, then simmer, partially covered, for about two hours.

Once the horse gram is cooked (it doesn’t turn to mush, but cooks through), add the salt, and keep it aside, covered.

Meanwhile heat the ghee or oil in a small thick-bottomed pan. When the ghee melts or the oil shimmers, add the spices in the following order: first, the udid dal, until it reddens; then the mustard seeds until they pop; then the black pepper shakes; finally, add the crushed tomatoes. After a few minutes of cooking—perhaps up to fifteen minutes—the tomatoes will have turned several shades darker and the oil will have separate. Turn off the heat and empty into the pot of horse gram. Stir it in and simmer gently for a few minutes to meld flavors.

Garnish with cilantro, avocado-onion-lime, or nothing at all. Serve with a hot mound of white rice on the side.