Folks, I thought I knew from tea. I grew up with cups of tea being downed two, three, four times a day, to the point where there there’s almost always a pot of tea going on the stove. Mornings and evenings are centered around tea. Tea and toast, tea and eggs, tea and porridge, tea and chaat, but tea, tea and tea.

My mother’s side made tea boiled, the Indian way. Loose leaf black, in a pot of water and milk, boil, sugar added to taste, strain into mugs. My father’s side made it the English way because my grandfather had worked with the British in their day. A tray comes to the table, loose leaf black tea steeping in a teapot, covered in a tea cosy. Milk and sugar are in their own pots. Tea is strained into a cup, milk and sugar added to taste. The cup is on a saucer. Always on a saucer.

Food stalls big and small, all over the alley ways of India, made tea the mother’s way. Except they had a giant pot going all hours a day in all kinds of weather, and their means of straining is a giant white cloth except it is pretty much brown — a grayish mahogany — from years of straining tea. Not sure when and if it gets washed. The liquid is strained into little glasses: you can order the full, in which case it goes up to the brim. Or you order ‘cutting’, in which case it goes up to under the smooth rim.

In my teenage years I discovered, going to Chinese restaurants with friends, that the Chinese had a different take on tea completely. We could not believe it. Just hot water? No milk, no sugar? But it was…strangely addicting. Those little handle-less cups kept being refilled.

So I heard recently from my Nepali friend that Tibetans are tea drinkers too, but given that they live among the mountains, and need strong muscles and layers of fat to protect themselves from the cold, they need a lot of butter; and what better place to put it, than in the interminable cups of tea? That’s right folks, Tibetans like their tea with butter.

I could not believe that salty, buttery tea existed when I first heard of it; next, I wanted to try it. Try it I did, at my friend’s house. It was luscious and soothing. Next, I wanted to try making it. It took me three tries to make something acceptable, but now I am quite fond of it; and you know what, if you are diabetic or happen to need to climb some mountains on your way to work, this may be just the tea for you.

This recipe makes just one cup but is easily multiplied. Put one cup of water in a pot with one teaspoon loose leaf black tea. I used orange pekoe Indian tea. Heat it on the stove, but there is no need for it to come to a boil, I found that without any sugar to mask the natural bitterness of tea, I needed it to not develop any bitterness at all. Take it off the heat when it seems as though the water has turned a light reddish brown.

Strain the tea into a blender. In Tibet they use a butter churner that is operated by hand and rather decorative. My blender is nothing to sneeze at but I have to admit it doesn’t compare in sheer beauty to the Tibetan butter churner. 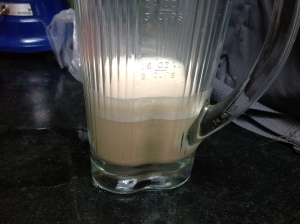 Tibetan tea foamed up in blender

Run the blender for a few minutes till the tea gets very foamy. Pour into a cup and enjoy.