If you read my last post, you know that I am trying to rescue my harvest of green tomatoes. I made salsa verde out of some of them, but the question naturally arises—how much salsa verde can one family reasonably eat? The answer is—not much. So on we go to other ideas.

But first, I threw out in my last post that my crop was threatening to be swallowed up by late blight. I did not know this at the time, but my tomatoes were brushing up against history. This is the same disease that once struck potatoes in Ireland, in 1845 precisely, and loosed famine upon the land. The cause of the disease is a pathogen known as water mold. An unassuming name, but it hides some points of interest, as Sherlock Holmes might say. You know the game that kids play where the first question asked is: “animal, vegetable or mineral?” Well, a similar first question to ask about lifeforms is: is it an animal, or a plant? Or a fungus (like mushrooms and yeast), or perhaps a bacteria? So which of these is the water mold?

Neither, it turns out. It is not an animal, nor a plant, nor a bacteria, and not, also, a fungus, though it superficially resembles one. Its is in fact from a separate kingdom of life entirely, known as the oomycetes.

You know that a foreign vegetable has been completely accepted into Indian cuisine when it undergoes chutneyfication. By this metric, the tomato has become a quintessential Indian vegetable since the Portuguese brought it over in the 16th century. The number of recipes for tomato chutney is immense. Here, though, is one that draws from Bengali cuisine. 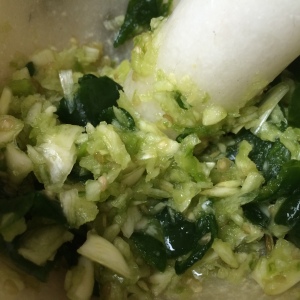 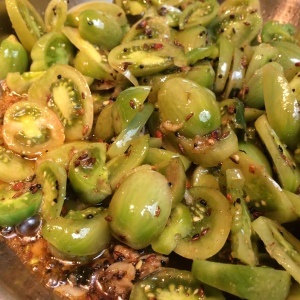 Tossed with oil and spices 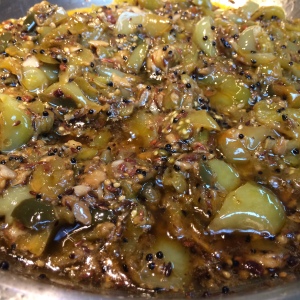 Pulverize the garlic and chili in a mortar and pestle until it is a paste. Heat the oil in a wide, thick-bottomed pan on a medium-high flame. When it shimmers put in the five types of seeds (cumin, mustard, fenugreek, fennel, nigella). When they sizzle and pop, the asafetida and red chili powders. When they foam up, the garlic chili paste. The paste will cook in a few minutes, but make sure it does not burn. Now the rough-chopped tomatoes go in along with the salt. Toss to combine with oil and spice.

Cook on medium-low for a whole hour, turning occasionally and mashing with the back of the spoon. In an hour, it will have dried quite a bit, and the oil will be gleaming through. Mash once again, let it cool, and empty into a jar.