If by reading the title you expected intrigue and a spy-vs-spy story, you came to the right place. The story of Salad Olivier begins in Czarist Russia when wealth and luxuries were not yet verboten. A Belgian chef known as Lucien Olivier came to Moscow in the 1860’s bearing secrets of French cooking. He opened a fancy-shmancy restaurant in Moscow called The Hermitage. This was not a one-room affair, rather an entire building with multiple dining rooms. Here Chef Olivier served a salad with every manner of luxury ingredient and choice meat — caviar, capers, game hen, crayfish tails. He called this the Salad Olivier.

Of course, he did not invent this salad out of his sheer imagination but rather based it on a famous dish from Provençe known as Le Grand Aioli. This is essentially a feast of vegetables and meats, laid out separately to serve with aioli, which is basically a mayonnaise with garlic and mustard. He served his salad in layers, the ‘Provençal sauce’ on the side, to be poured over. His Russian customers would dispense with the niceties and simply mix it all up. So he followed their lead and Salad Olivier was served the Russian way, all mixed up with his Provençal sauce.

Salad Olivier made his restaurant famous; although the main ingredients of the salad were obvious for all to see, he never divulged the secret of what went into his mayonnaise. Now remember that mayonnaise at the time was a French import, not ubiquitous on every grocery shelf from Japan to the United States. It had to be made by hand. It is an emulsion, which means the liquids involved in it are so well mixed together that it is impossible to tell what went into it. So as you can see, mayonnaise is inherently mysterious. So is milk, another emulsion.

Sorry for the bad pun, but Lucien Olivier milked it. The secrets of his mayonnaise remained hidden until his grave. They had to come to his restaurant for the salad, or else go without. But then, a disgruntled local employee called Ivan Mikhailovich Ivanov tricked him into leaving his kitchen momentarily while the famous mayo was being whipped up. He managed to note down the ingredients, left the restaurant, and began selling his facsimile of Salad Olivier at a different restaurant, under the name of Capital Salad (Stolichny Salad).

This stolen salad was never quite as good as the original, but it did mean that the rest of middle-class Russia was able to partake in it. With the revolution came the backlash against all things bourgeois, and this salad was stripped of its more expensive ingredients. A sort of consensus developed around a small set of ingredients — potatoes, hard-boiled eggs, boiled chicken, peas, pickles.

From Russia it spread to the Middle-east and Asia, and to India. Growing up, my introduction to Russian salad happened in a vegetarian restaurant in India that avoided the chicken. Somewhere en route from Russia to India a very important modification was made to it — Russian salad in India always includes chunks of some crunchy fruit — pineapple, apple, etc. In my opinion this is the best part.

In fact that makes it, to my palate, more delicious than the potato salad that is traditional for July 4th barbecues, so that is what I brought to a friend’s. Any hint of treason is purely for taste. 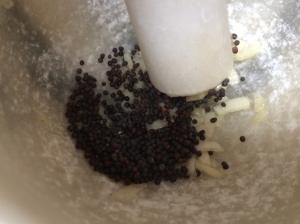 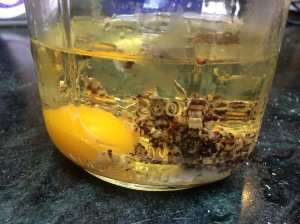 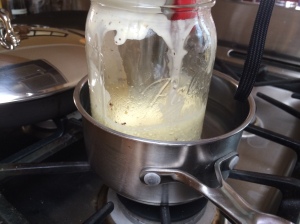 Put minced garlic and mustard into  a mortar along with a pinch of salt. Give it ten minutes to sit and then pound it to a paste together. You do not have to powder the mustard seeds completely. Put the oil, eggs, garlic-mustard, lemon juice in a Ball jar or Weck jar or empty jam jar. Using an immersion blender, whir it for just about 30 seconds or a minute. The mayonnaise should come together right away.

Now my salad was going to be sitting out in the sun so I chose to heat it up to to 135ºF in a double boiler while blending away. You do not need to do this, specially if you use pasteurized eggs.

Now for the Russian salad, based on a French salad, made the Indian vegetarian way, for America’s Independence day. These are the ingredients I used, but please be creative and add whatever makes sense to you. 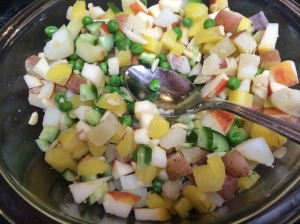 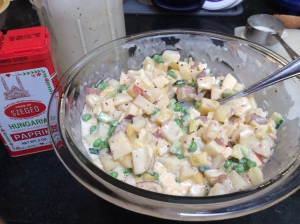 Boil the potatoes and carrots in their skins, in salted water. When done, drain, let them cool, then dice into small pea-sized pieces. Dice the apple and cucumber into similar sized dice as well. Leave the skin on (adds a nice colorful touch). Thaw the peas.

Line your serving dish with the lettuce. Mix the ingredients together in a mixing bowl. Add the mayonnaise, paprika, and salt to taste. Mix together nicely. Serve it out in the bed of lettuce.

18 thoughts on “A Russian salad for America’s Independence Day”