The other day my daughter and I did a fun kitchen project which had nothing to do with food — we made beeswax hand lotion at home. Never having done this before, I found myself a little befuddled. I had to stir in stuff while the beeswax was still melted. But how to keep it warm and not let it stiffen up while the whisking is going on? Luckily, my experience with a completely different recipe — chocolate frosting — helped me. I stole a step from that very different recipe. I set up a double boiler and kept the beeswax warm in that. It took a while but it worked.

I hope that did not raise any eyebrows. How dare I steal a step from one recipe to another? Did my hand lotion start to smell chocolatey? Of course not, I didn’t add any chocolate to it. Is my hand lotion now forever tainted as being somehow impure? Or unnatural? No — I demand that my misbegotten hand lotion be given its proper place in the pantheon of hand lotions. I ask that my hand lotion be accorded the same respect as other hand lotions, which means, please judge it on its traits. Does it smell good? Does it make your hands feel soft? And so on.

What does this have to do with genes? Everything.

DNA is a recipe. It isn’t really a recipe for living beings — it is a recipe for proteins, which in turn are a recipe for us. Sometimes biologists stress that all life on earth is related. So every weed you see growing in a sidewalk crack, or every bacteria that you can’t even see — is your cousin. Mostly we know that because all of our DNA’s are written in the same language.

I’m going to call this language Dnaelic, just to irritate my science readers and my Gaelic readers in one stroke. Where English has 26 letters, Dnaelic has just four: A, T, C and G. Words in Dnaelic are made up of 3 letters and are called codons. So CCC is a codon, TGT is a codon, and so on. Just like a sentence in English is a sequence of words that expresses a complete thought, a gene in Dnaelic is a sequence of codons that expresses a complete protein. Dnaelic even has punctuation marks like English to mark the start and end of genes.

Imagine if the chocolate frosting recipe had been written in say, Choctaw, while the hand lotion steps were in English, I would find it pretty difficult to transfer steps from one to the other. Since they were both in English, it was easy. In fact, I will show you what I did.

On the left is my original recipe. I’m going to call it the DNA for hand lotion. Now I am going to ‘cheat’ and drag in an instruction from the DNA for chocolate frosting.

Can you spot the difference? My DNA for hand lotion now has an instruction spliced in. It will make better hand lotion, I promise. It will be softer (because the ingredients mixed in better) and will be way easier to grow. Sorry, I mean, way easier to make. And you will certainly be able to sell more of it.

I’m going to call that dragged in step the trans-step. As you can see, it does not look any different than any other step. Theoretically, I could have just thought it up out of the blue (mutation) or, possibly, I might have got that inspiration to use a double-boiler by watching other hand-lotion makers at work (cross-breeding). Nevertheless, I got it from chocolate frosting, and to mark that special history, I will call it a trans-step.

GMO on the Interwebs

No doubt the example I gave above is a bit of a fable and much simplified. But as I read the commentary on GMO all over the Interwebs I find a weird dichotomy; the debate between the science folks proceeds at a very sophisticated level, while the debate between laypeople shows no understanding of the basics of genetics. Once in a while when there is cross-communication between the two communities, the debate devolves into accusations of idiocy and political hackery. The two communities cannot speak to each other! Our DNA’s may speak the same language but we certainly don’t.

As laypeople, we need to understand the basics of this very important debate. We are all voters. So let me reframe some common GMO debates in the light of my hand lotion fable.

Layperson: “Genetically engineered foods have not been proven to be safe or healthy. You keep asserting over and over again that they are safe, but that does not convince me.”

Scientist: “I only keep saying that because I want to keep things simple. In reality what I mean is, ‘genetically engineered food’ is not a useful category. It is like saying all recipes that have borrowed steps from very different recipes are suspect. This is not a useful way to look at it. One has to study each genetically modified creature on its own to see if the introduced traits are good or bad (and, we have). In the hand lotion example, the borrowed step made a good hand lotion. But we could have as well borrowed a step that ruined it — say, a step that said ‘now throw it down the drain’. That would make a terrible hand lotion or actually, not make a hand lotion at all.

“There are many genetic engineering research projects ongoing. Let’s judge each on its merits. Here is one that will control the mosquito population to prevent them causing malaria. Here is one that could help Vitamin-A-blindness in the tropics. Aren’t those good things?”

Educated layperson: “I do actually think that genetically engineered food as a whole is something to worry about. I worry that you don’t understand the recipes of living beings well enough to be tweaking them. What if you put in a gene and it produces a protein as expected but it also has another unexpected effect? I also worry that your actual process is not very precise.

What if instead of the clean splicing that you showed in the hand lotion above, the spliced gene actually goes in scrambled (left) or like this (right) where the transgene is ‘loose’ inside the DNA or somehow different? What if you are introducing proteins into a creature that has never had a protein quite like that before — does it matter? It is as if you put in a step in the hand lotion recipe to add something no hand lotion has ever seen before — like, say, I don’t know, Coca Cola. Would that cause allergies? Would it still be hand lotion?

The Odd Pantry (moderator): “Good points, Educated Layperson. I might have to do a post on each of your concerns.”

Layperson: “Genetically engineered foods are unnatural. Nature should not be meddled with.”

Scientist: “I find it amusing that you are typing this out on a keyboard and sending me this over the Internet. Did that not strike you as ironic? Everything natural isn’t good. The dinosaurs were wiped out by a perfectly natural asteroid that they would have loved to have meddled with.

“You seem to have insufficient respect for how much humans have meddled with nature already, even before GMO. 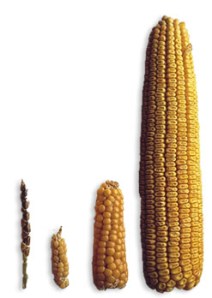 We have turned corn from this (left) to this (right) with just conventional breeding (and some help from nuclear technology). No, I’m not joking.

“On the other hand, you have insufficient respect for the tricks that nature gets up to already with DNA. The usual thing of a mother and father mating to produce offspring is one thing. But our DNA is being constantly altered by completely random mutations, most of which are fatal. Did you know that while scientists carefully selected a bacterial gene to put into corn for a specific purpose, nature does this all the time? Bacteria not only transfer genes to each other (without mating), but have known to transfer genes to insects, and even humans. In a completely random, unpredictable way.”

Educated layperson: “You are right, Scientist. Nature is vaster than any of us can imagine and calling something ‘unnatural’ is, well, childish. But I will rephrase my concern. My concern is that GMO foods do not promote biodiversity, on the contrary, they promote an extreme form of monoculture. The corn example you gave — yes, I am aware that we have bred teosinte into corn, a huge distance (and not always for the good). But you know what? The breeding didn’t happen in a lockbox. Corn was always free to spread its pollen far and wide as plants will do. Wild species and cultivated species could mate. With GMO, it is single strain that is expected to be grown in a lockbox and not share pollen with other plants. I’m sorry to go back to that word, but this is unnatural.”

Scientist: “That’s not me demanding that strains of crops grow in a lockbox, that’s Business.”

Educated layperson: “True, but all the fun you have in the lab doesn’t really come to us except through Business.”

The Odd Pantry (moderator): “You are on fire today, Educated Layperson. I might have to do a post on what the problem with monoculture really is, since you didn’t really explain it.”

Scientist: “Oh, that again. Look, I agree with Educated Layperson above that GMO plants will want to cross-breed with wild plants. But whether that counts as ‘contamination’ — doesn’t that depend on whether the GMO plant has good traits or bad?”

Educated layperson: “Good for what, and bad for what? A plant may do exactly what it is engineered to do, for example have insecticide. But if it escapes or mates with wild plants, you now have insecticide plants growing all over (think: superweed). They are going to be quite invulnerable, don’t you think? And what about the decimation of the insect population that might occur? It seems to me that you often ignore the second-order ecological impact of the plants you build.”

The Odd Pantry (moderator): “Oooh, ‘second-order ecological impacts’. Mind if I steal that? Another post, I guess. I better get busy, I have a lot of posts to bore my readers with.”

[Disclaimer: all characters are fictional and not meant to represent any real person. I will admit to having a special fondness for Educated Layperson, though.]

14 thoughts on “The GMO debate as a fable”