This vegetable taunts and beckons me every time I walk by it at the grocery store. I have earlier compared them to caterpillers or seaweed, but now I’m thinking it looks like nothing but a question mark.

What am I? it seems to say at the grocery store. Don’t you want me? And then when I break down under the emotional blackmail and buy some, the bag sits in the fridge untouched for a couple days while I wonder what on earth to do with it. What will you do with me, huh? they say. Why did you buy me if you have no idea what to do with me? Why? How? What? And more importantly, when?

A permanent rebuke, is what it is. But I’m no slouch. I don’t let a mere vegetable sit there passing judgment on me. I’m a food blogger, is what I am.

Thus fortified, let us try to seek the heart of fiddlehead ferns once again. Here is the first such quest. I think I did better this time.

Here is the thing about fiddleheads. Their flavor is often compared to asparagus, but I feel like it has a sort of medicinal sweetness like that of artichoke, which is enhanced by cooking. The fleshy part is quite scanty compared to that of an artichoke, and comes encased in a stem, the fibrous parts of which would be nice to crisp up. So — it would be nice to fully cook the inside and crisp up the outside. Last time I had tried sautéing it and noted the difficulty of getting it to take on a char that way. So this time I tried a different method.

Blanching for 5 minutes to get the inside to cook. Then roasting in a single layer for the crispness.

You can see how it turned out. For me, it was finger food. Next time — add some chili powder and maybe lemon squirted on top. 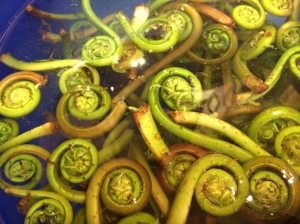 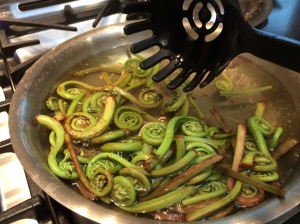 Wash the fiddleheads by soaking in a tub of water and swirling it around and possibly rubbing the baby ferns gently. Bring about 4 cups of water to a boil and salt it. When it is boiling, put the fiddleheads in, bring to a boil once again, and let them blanch this way for about 5 minutes.

Fish them out. Lay them out on roasting pan. Cover with more salt and olive oil. Rub coriander powder all over. Place the two fat cloves of garlic tucked in in a  couple places, covered with oil also. Roast at 450°F open, for about 8 to 10 minutes. Halfway during cooking, pull it out and stir to turn most of them over. 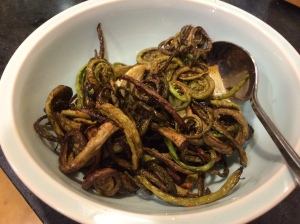 The garlic is also fully roasted by this point, and the paste from inside can be squeezed out like from a toothpaste tube. A teeny bit of garlic paste with a fingerful of crisp fiddlehead spindles — it was delicious.

For more information on fiddleheads (they are the immature fronds of ostrich ferns)  read this:

and of course, don’t miss Wikipedia on the subject:

15 thoughts on “The ? vegetable, roasted”