I am very proud of my husband. He went from being a cilantro-hater to a cilantro-tolerator (only if it is minced fine), from there to a wary cilantro-liker (if used in the right dishes), to a must-have-cilantro-flag-waver (in some dishes), to an unabashed cilantro-promoter. The other day he informed me that someone had brought a dish of cilantro-rice to a work potluck. He thought it tasted very nicely savory and wanted me to try making it at home.

This is what marrying an Indian will do to you. Go marry an Indian, all of you — there certainly are enough of us around.

I know he will insist that I put in a disclaimer — that he still can’t stand cilantro that is un-minced and placed right on top of food in all its stemmy and leafy glory. So there you have it, disclaimer placed.

I had never heard of cilantro rice before. Given that I love cilantro and make chutneys with it all the time (here is one and here is another), and also that I’m constantly looking for ways to dress up rice, this is surprising. Cilantro rice marries these two interests. Now that the match has been made, this will be a staple in my kitchen.

There are various ways to do this but I basically made a chutney out of the cilantro and cooked it then mixed in rice. You could simply mince the cilantro with a knife or not cook it.

Cook the rice the normal way, but with somewhat less water than usual, to keep the grains from getting too mushy. Grind the cilantro, the chili and the ginger together using as little water as you can get away with — this basically means you are making a chutney. Finely chop the onion.

Heat the oil in a wide thick-bottomed pan on medium high. Throw the tempering items in in the following order: first, the udad dal, when it reddens the mustard seeds, when they pop the curry leaves. Stand back if you value your peace. Wait for the leaves to sizzle and be done.

Now in goes the onion. They will start to get translucent and start to redden at the edges.

Clear a little space to make a hot spot on the pan and put in the cashews. As they roast they will take on a few dark spots. This will take a few minutes; now it is time to put in the chutney that you ground before. Throw in the salt, cook the paste down for a few minutes. 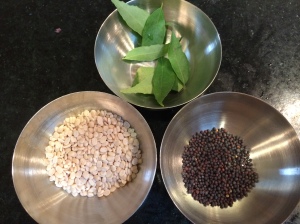 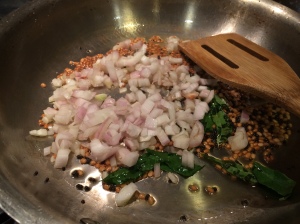 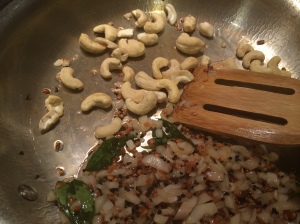 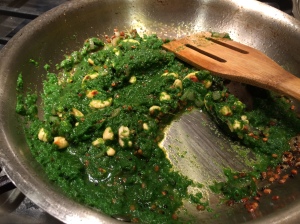 The rice goes in next. Break up the clumps with your fingers if need be. Stir to coat all the grains with the chutney. Cover and cook for a few minutes on low.

Here is the result — fiddlehead ferns on one side, squash raita on the other. They will come later.