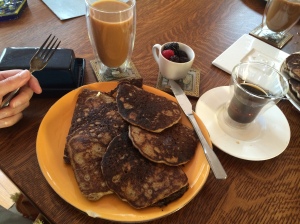 Some time ago I hiked up some hills around Lonavla with a friend. We were out having fun, well-prepared with our water bottles and GPS watches and clothes made of modern fabric that is apparently made from gasoline. Our feet were shod in lightweight sneakers that made the shards of rocks underfoot all but disappear.

Incredible views on all sides of us. Buddhist cave carvings from centuries ago ahead of us.

There we ran into a farmer coming downhill on the same trail as us. No gasoline-fabric for him. He had on his airy dhoti around his waist that he probably wore no matter what the situation. A light cloth wound around his head protected him from the sun. Thin as a rake, he walked on those hills as though he didn’t think about it too much, just did it.

I felt weirdly embarrassed. This man naturally belonged here, while we were interlopers from our fat happy internet-savvy world and we clearly didn’t. And he wore no shoes! Shards of rock or not, he was barefoot and scarcely concerned by it. At that moment my shoes happened to pinch a toe or two, and I thought to myself — if the farmer can go without shoes, perhaps I can too. Maybe the rocks are not as bad as they look.

So I tried walking barefoot, hanging the shoes from my neck by their laces. I couldn’t go four steps without hurriedly getting them back on again. Oh, the shooting pain! Tens of jagged rocks at any point poked right into my soft soles.

As I watched the farmer keep his steady pace down the hill, I realized that although this man had probably never seen a computer keyboard in his life, he had mastered this marginal, mountainous environment and knew secrets about it we didn’t. He fit in here, while the only way we could was to drag paraphernalia from our fat happy internet-savvy world into it.

So…ah yes, buckwheat. Buckwheat is the farmer. Buckwheat grows on mountains with gravelly soil and practically no nourishment and does it six ways to Sunday. It doesn’t need much but gives a lot. Secrets — yes, it knows a few. It scorns pesticides and actively dislikes being coddled with fertilizers. It will grow quickly, produce quickly in a short season from June to September, swamp out the weedy flimflam, laugh blithely about insect pests, and produce a non-grain grain that will feed you all the essential amino acids. Count them — nine — all amino acids essential to humans.

Buckwheat certainly has a whiff of the old world. It grows widely in the Himalayas and is used for rotis and gruel. In Japan it is used to make the famous soba noodles. Kasha and blini in Eastern Europe. Immigrants brought this grain to America and in the 18th century 20 times more acreage was devoted to buckwheat than is now.

Then came the use of fertilizer — one of the inventions that fuel our fat happy Internet-savvy generation, and with it crops like wheat and corn that want coddling; and buckwheat was edged out. Makes you wonder what all that buckwheat was being used for, doesn’t it?

Undoubtedly a big proportion of the buckwheat flour went into pancakes, given how delicious they are. In our family we were introduced to them via the hippie sensibility of Santa Cruz, where my husband lived for four years. Now they are a weekend staple. They go with maple syrup, but remember to use good, natural, golden maple syrup from the sap of maple trees, not the fake sticky one that comes from corn.

Stir together the dry ingredients in a large bowl. 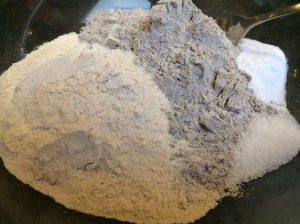 Meanwhile crack the eggs into a separate bowl and whisk. Then whisk in the buttermilk. Melt the butter and whisk that in as well. 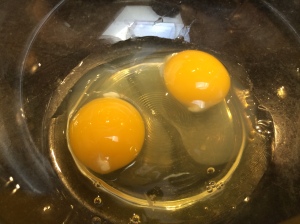 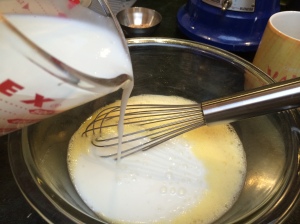 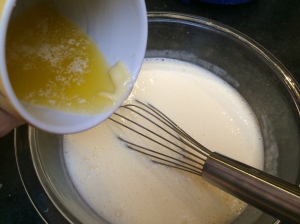 Now that the wet and dry ingredients are separately ready, it is time to combine them. Pour the wet into the dry. Stir gently. Most lumps (almost all) should be gone. The consistency should allow it to pour; you might find you need to add water. I usually add about half a cup. 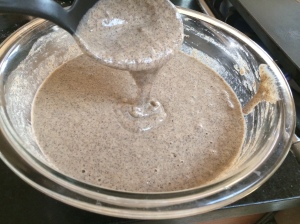 To cook, I have a large non-stick griddle on highish heat. (‘High-ish’ is the point between medium-high and high). We found that butter smokes too much so we use almond oil for cooking. It has a high smoke point and a nice aroma. A tablespoon of oil for each batch of six pancakes works nicely. Spread the oil all over. Pour six ladle-fulls on like shown, each should be about four inches wide. All told you will get about 20 such pancakes. 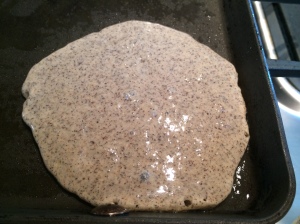 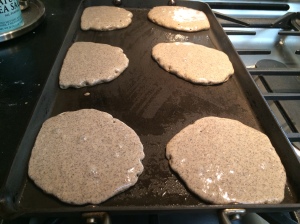 The time to flip each is when several bubbles have arisen and popped; and the edges look set. Flip and cook on the other side for 30 seconds to 1 minute; it will softly rise in the meantime. 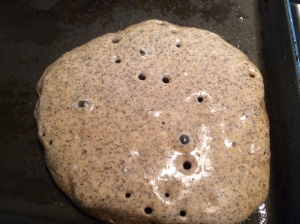 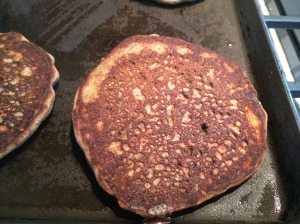