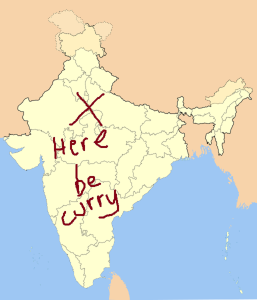 I’m sorry to go all dramatic so soon in the blog post but do you know how there was this guy called Captain Ahab who had sworn revenge on a whale? Sometimes I feel like that when accosted with the word ‘curry’. Seems like an innocuous enough word…and descriptive, so why do I hate it so much? Let me tell you why. It is not descriptive and it is certainly not innocuous. It obfuscates, mystifies and conflates things. And if you think about it, that is exactly the opposite of what language is supposed to do.

Why do I hate the word?

I hate it because it is a word the British made up from half-heard scraps to vaguely signify the entire cuisine of a sub-continent. It is sometimes used as a generic term, but it promotes the notion that all Indians eat a single dish with a single spice mix in it. I hate it more when Indians use it to communicate with English-speakers. Sorry, people. I hate it.

People use this word in different senses.

During the Raj the British brought tea to India and took away a notion of savory dishes made of a mélange of onions, ginger, garlic, coriander, cumin, and turmeric. As this blog post explores, cookbooks from the seventeen hundreds had started to experiment with Indian ways of cooking, say, chicken, using onions, ginger and turmeric. By the eighteen hundreds though, a standardized curry powder had replaced the powdered ingredients.

Here is a very early advertisement for Curry Powder: This was being sold to households as ‘exceedingly pleasant and healthful’. Any dish made that used it, apparently became a curry.

First British advert for curry powder from The British Library

Needless to say, Indian food does not use a single spice mix; or necessarily a specific mix at all, most of the time, spices are thrown in whole. Some famous dishes (e.g. sambhar; pav bhaji) have gotten attached to their specific combinations; other specific mixes are used for special needs (garam masala; chaat masala). Often times the spice mix is a paste. Most of the time there is no mix at all, but just spices.

So what does curry mean — do you see what I mean by obfuscation and lack of clarity?

In which I play whack-a-mole

One of the reasons the word ‘curry’ has become such a fixture is that weirdly, there are a number of words all over the subcontinent that vaguely sound like ‘curry’. This makes people nod happily at the word, thinking it is an Anglicization of the one that is most familiar in their language. Most of the words below, by the way, are mostly unrelated to each other, and most have at one time or another claimed to have been the origin of ‘curry’.

A. Kadhi: There are the many ‘kadhi‘ preparations in the north which involve roasting chickpea flour and yogurt. This preparation is not highly seasoned, usually, but rather, mild and yogurty. This comes from a Sanskrit word meaning “boiled stuff“.

B. Tarkaari: In Nepal or thereabouts, tarkaari is the vegetable side that accompanies the daily meal of rice and lentils.

C. Kari: Tamil has a word kari which means black or blackened. Over time this came to mean grilled; then, stir-fried. Tamil uses two types of ‘r’ sounds, this one is the softer one.

D. KaRi: This is the second, unrelated Tamil word with the harsher ‘R’ which means ‘meat’.

E. Carriel: The Portuguese colonized India before the English did, and by the sixteenth century they were claiming that Indians ate something called Carriel. This is reported by a Dutch traveler named Jan Huyghen van Linschoten, He spent time in Goa and this is how he describes food there: “Most of their fish, is eaten with rice, which they seeth in broth, which they put upon the rice, and is somewhat sour, as if it were sodden in gooseberries, or unripe grapes, but it tasteth well, and is called Carriel, which is their daily meat.” Is this from the Tamil kari meaning blackened or grilled? or from the Tamil kaRi meaning meat? This word, Carriel, is still used in Goa in a sense similar to Curry.

There is a pervasive piece of misinformation that first appeared in the  Hobson-Jobson Anglo-Indian Dictionary in 1886, and subsequently has been spread throughout the Interwebs by Wikipedia: this is that Curry comes from the Tamil word ‘kari’ meaning sauce. As I listed above, there is no word ‘kari’ that means sauce in Tamil. Since English does not have the other, harsher ‘r’, we do not know which ‘kari’ they meant.

On the other hand, perhaps the English were already experimenting with ‘curries’ before they ever came to India…. 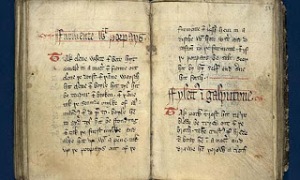 The Forme of Cury

F. Cury: Way back in the 14th century, a cookbook published by King Richard II’s cooks, which contained 196 recipes, was called ‘The Forme of Cury‘. This was way back before colonization ever happened…this word is from the French root ‘cuire’, the same as ‘cuisine’.

So what word to use instead?

Ah, language. I tend to use the word ‘gravy‘ for wetter preparations, such as ‘potatoes in tomato-garlic gravy‘. This is the word we used at home. For drier preparations, I might use the word stir-fry or sauté. In general though, most of these dishes use the method of braising, so that word is usually fitting. ‘Stew’ works too. Spicy stew perhaps?

Help, I feel another rant coming on. ‘Spicy’ does not mean ‘hot’ as in chili hot. Somebody stop me please.

19 thoughts on “Getting off the curry train”